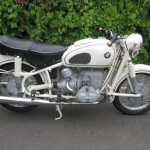 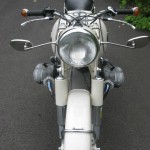 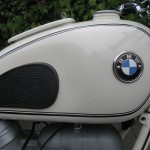 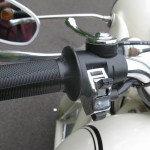 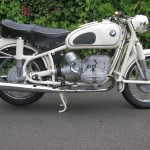 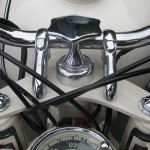 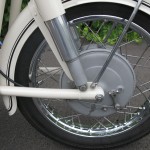 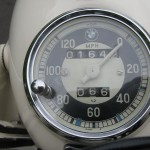 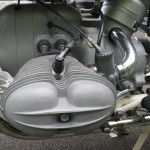 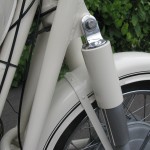 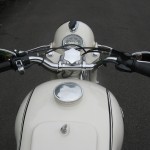 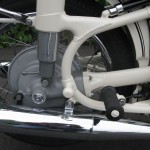 This BMW was completely restored from the ground up.

The frame and swing arms were stripped, zinc primed, and powder coated.

They were then scuffed with 300 grit paper and painted along with the sheet metal to make the colour scheme of the bike totally consistent.

The fenders and the remaining sheet metal was media blasted and repaired before paint.

All of the chrome parts were re-chromed.

The aluminium was professionally polished.

Original and NOS parts were used where possible.

The engine, transmission and final drive were totally disassembled and evaluated.

New pistons, valves, guides and all new bearings and seals were installed including the correct rear main spherical bearing which was customary on the R50S, R69 and the R69S.

The cases were media blasted and clear coated.

The shocks were dismantled and rebuilt with new cartridges and rubbers.

The wheel hubs were media blasted and coated with clear satin to prevent oxidation.

New wheel bearings were properly shimmed the and seals replaced.

The wheels were laced with new stainless spokes.

The carburettors were dismantled and soda blasted.

A very thorough and complete restoration of this BMW R69 Motorcycle.

If you're looking for the perfect BMW R69 – 1960 for sale then take a look at the hundreds of restored classic motorcycles listed on our extensive Motorcycles For Sale pages. We regularly feature very nice restored BMW R69 – 1960 bikes for sale.