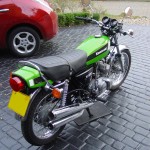 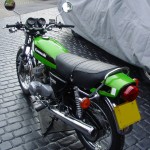 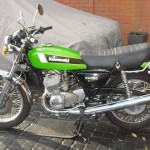 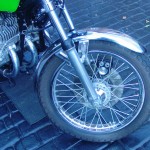 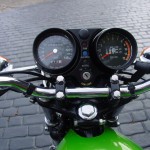 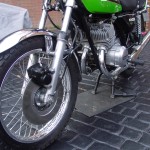 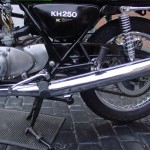 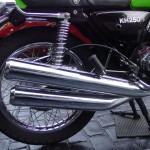 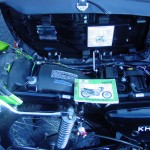 This lovely little Kawasaki was fully restored by its owner.

The frame, swing arm and stands were powder coated.

The fork stanchions were hard-chromed and new seals were fitted.

The original Takasago wheel rims were re-chromed and laced with NOS Kawasaki spokes.

The original exhausts were re-chromed.

The carburettors were ultrasonically cleaned and rebuilt.

The paintwork was refinished.

A new old stock seat base was sourced and fitted with new foam and cover.

A re-chromed kickstart was fitted.

The front brake was fitted with a new piston, seals, brake lines and pads.

An original headlight was sourced and fitted.

The original switchgear was refurbished.

A new genuine fusebox was fitted.