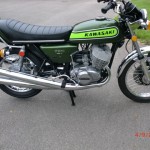 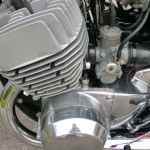 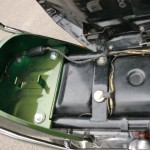 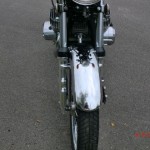 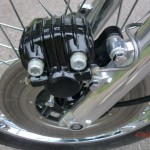 The frame, swinging arm, headlamp bowl, and the battery box were all blasted and powder coated.

The wheel rims were re-chromed and rebuilt with new spokes.

The original exhaust system was re-chromed.

Other parts that were re-chromed include:

All other nuts, bolts, spacers and washers were either re-plated or replaced.

The front master cylinder was fitted with a new piston and seals.

The body work was professionally repainted and finished with new decals.

The engine was dismantled and all parts were checked,  it was then rebuilt with new seals and gaskets.

The carburettors were ultrasonically cleaned.

The engine casings and front fork sliders were lightly polished.